In our day to day life, we make our concept of direction after seeing the position of sun. In fact, this is a truth that sun rises in the East and goes down in the west. Thus when we stand facing sunrise, then our front is called East while our back is called West. At this position our left hand is in the Northward and the right hand is in the Southward. 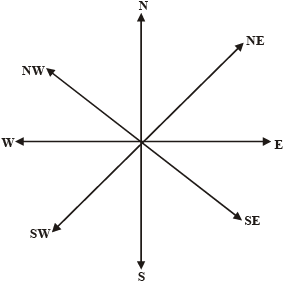 Let us see the following picture:

Let us understand it through pictorial representation: 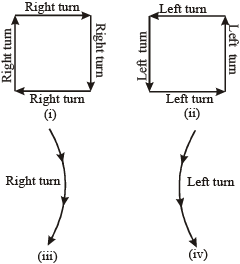 Solution. (4): Diagram of Pravin walking direction is as follows:

Solution. (5): According to question,

Hence, T is in south-east direction with respect to R

Solution. (1): As clear from the adjoining diagram, C lies to the east of A.

Solution. (4): The movements for Gaurav are as shown in figure.

Solution. (2): The route is as shown in the adjoining diagram.

Thus, the man started his journey from the south and moved northwards.

6. If A is to the south of B and C is to the east of B, in what direction is A with respect to C?

Solution. (4): Clearly, comparing the direction of A with respect to clock in the second diagram with that in the first diagram, A will be south-west of C.

7. This year, Balu’s birthday is on 27th January i.e. Wednesday. Balu remembers that Mohan’s birthday is exactly on the fifth Friday after his birthday. How much younger is Mohan than Balu?

Solution. (2): First Friday will be two days after Wednesday.

8. Shailesh saw the movie on Monday. Nitin saw the movie two days prior to Vikas but three days after Shailesh. On which day did Vikas see the movie?